This student was chronically late every morning.  I was teaching Information Technology in the first period which meant a 8:00 start and a early morning bus ride.  Because of this the student was almost always late and sometimes not even bothering.   I was trying to motivate her to come early, trying to do a hook that would make her want to go through the extra effort of getting up early (and not for pay!!) and be awake enough to learn.  I tried Photoshop with personal pictures, web designing (absolute dismal failure with her) and along came Genius Hour (20%) every Friday.

The first challenge was to get her to come on a Friday (our Genius Hour Day), and when that didn't work, talking to her about Genius Hour when she did show up.  I kept explaining her options, discussing her interests, and what was possible for her to try that would be of interest to her as well as what I could support in my classroom as her mentor.  In the end she shows Audacity, a program that lets you edit music and has a manual on the website.  Once she saw what the program was capable of, once she had success right away in editing a song, that was it.  The power of SUCCESS, the look on her face when she realized she could accomplish something was priceless.

The power of Genius Hour transferred over from Genius Hour slow but steady successes to the rest of her work.  It was amazing to watch.  She not only started to do work in Photoshop, but she also was doing 110% in effort that was reflected in her work.  She wanted one on one help, but she paid attention, she listened, she came to class.  To assess her  learning I observed she teaching a friend who also was not highly motivated.  It was almost like the movie "Pass it on", students teaching students.

Most people talk about the motivation of choosing what you want to learn, or "Passion Learning" (http://www.passionforlearning.org explains their philosophy on this means of learning and I concur) .  But although I witnessed was the phenomena of "Passion for Learning",  mostly I believe it was the  success of knowing "I did that, I'm capable, I'm smart".

Realizing that you are capable of anything as long as you try is a lesson that is priceless.


To be honest when my teacher Mrs. P had brought up the idea of genius hour I was kind of like what the h*@l is she talking about this sounds so stupid, I don’t think I’ll be interested nor have any fun doing this. Eventually my partner and I had to pick an idea and I’ve always thought about how music is a big part of my life and I don’t go a day without listening to it, so I thought why not learn how to remix music myself because I usually listen to remixed music rather the original song anyways. So my teacher had downloaded audacity for us and I honestly had no idea what I was doing the first couple of days we had the chance to work on our project. I felt like it was way too confusing at one point, but there was a manual to help you and clips to teach you how to use audacity which made it a lot easier towards the end. I loved discovering new things about audacity, things I never thought I would even learn, for an example how to crop a certain part of a song, adding two or more songs and making it one remix, using effects and making it your own style. There was days where my partner and I would get frustrated because some things wouldn’t work out the way we wanted it too, so sometimes I did feel like giving up, but I felt the end result was great and we did remix two songs and made it our own. I would definitely do this project again.

What did you enjoy the Most in Genius Hour

“Genius hour is a time to explore and experiment with potential ideas. I discovered with genius hour that some of ideas started out huge and complicated and able to break it down into a simple and easier idea.” 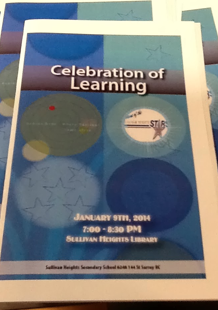 A great definition from a student of what genius hour is to students.  What did students enjoy most about genius Hour?  This is a summary of their responses.

18 students replied the thing they enjoyed the most about Genius Hour was being able to learn and do their own thing.  One student put it appropriately when he commented the following:

“The freedom to choose whatever I wanted. If I was given a project that I did not want to work on, I would not have done as good of a job, or worked as hard on it. Because Android Development was something that I wanted to do, I was truly interested in finding solutions to problems.”

The 2nd most common thing mentioned by students was that they enjoyed working with their friends and discussing their learning with friends.

But there were a number of other comments that I found interesting, comments that showed incite into why Genius Hour is great for students.  Here they are below, in the exact words of the students:
In summary I would like to quote a student once more.  The student’s comment made all the effort

worth it, from setting up this section of my Information Technology Course, to the “Celebration of Learning” we had from 7:00 – 8:30 where students presented and showed their work, to all the reading and feedback of their blog entries.  Here is a moment to remember in my career:

“I created something I never would have imagined and never thought about. I had never expected that I could do this. It never crossed my mind that I could be able to create something just from scratch to then branching it out and expanding it to create something that could be useful for certain people to use in the future if it was really useful. I got my idea after a few days of thinking hard and getting opinions from people which then created my genius hour project. Thanks to genius hour I never would have thought about this and created it. But if I were to do genius hour again I would have decided to do it on something else, but since this was a quick idea that came to my head I didn't get to expand much on it. But then again I had no idea what I was going to do until I got opinions from others.”

Email ThisBlogThis!Share to TwitterShare to FacebookShare to Pinterest
Labels: genius_hour

What my Students learned in Genius Hour

I've gone through the survey of the students' assessment of Genius Hour (last blog entry).  Here is a list of what the students themselves say they have learned.  Here is your test.  Tell me which are Grade 9/10 students and which are from my Grade 11/12 students.  The list of which # is in which grade is listed below:

Here is a short summary of what I learned and/or created at genius hour.
·

My Other web pages